An Artificial Memory for Whist 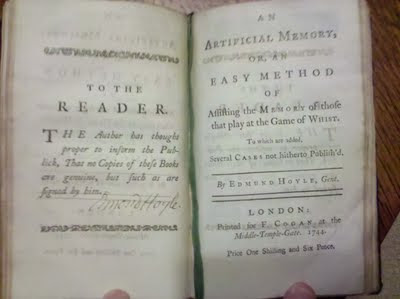 Hoyle's third book is An Artificial Memory for Whist (1743). It is a small thirty page pamphlet published by Francis Cogan in London.

The long title promises "an easy method of assisting the memory" but the recommendations are terrible. For example, "If in the course of play you find you have the best card remaining of any suit, put the same to the left of your trumps." (page 6) If you were to follow Hoyle's advice, a card sharp could watch you manipulate your cards and make inferences about your holdings, much to your detriment.

The book adds "several cases not hitherto publish'd" in the same style as the original Short Treatise on the Game of Whist (1742).

Cogan sold the Hoyle copyright to bookseller Thomas Osborne in 1745 and when Osborne republished the Short Treatise on the Game of Whist (6th edition, 1746), he included the text from An Artificial Memory and it ceased to be published as a separate book (except in Ireland, but the story of the Irish reprints is a story for another time).

For me, the big mystery of An Artificial Memory is who printed it. The title page of books from the eighteenth century generally identify the author and publisher, but not the printer. Sometimes you can identify printers through archival records such as the ledgers of the Bowyer print shop. More often you need to look at woodblock ornaments used throughout a book and compare them with those in other books for which you know the printer. That work is time consuming; nonetheless, I have identified the printer for all the early Hoyles, except...An Artificial Memory.
Posted by David Levy at 9:42 PM