updated September 19, 2015 to conform to the numbering scheme used in my online descriptive bibliography of Hoyle)

I've discussed Hoyle's individual treatises published by Thomas Osborne and the reasons why I am going to ignore Fredson Bower's generally sound advice and treat Osborne's collections as separate bibliographical items. Before trying to make sense of the Osborne collections, let me begin by reviewing the relevant individual treatises:
I've omitted all of the Cogan editions, but included Osborne's reissue of his Piquet and Quadrille. Recall the October 26 advertisement in which Osborne offered individual treatises at 1s. each and the full set of five books for 5s. bound.

Most of the surviving books from this era turn out to be collections, but with only four titles plus a sheet of the Laws of Whist, how complicated can it be? Well, I've seen 16 examples of the treatises bound together in one configuration or another and the variety is surprising. The chart below summarizes copies I have examined, listed in the order seen. 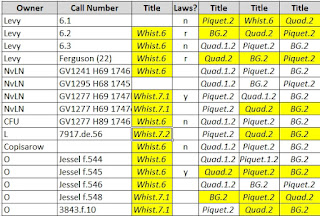 I hope the data are reasonably clear, even if conclusions are not.
Which of these are publisher's bindings and hence separate issues? Which might have been purchased individually and bound by the purchaser?

I noted previously that the individual treatises were stab sewn and sold in drab blue papers. Stab sewing is plainly visible in my copy number 6.1, pictured at left. That, together with the fact that the backgammon treatise is absent, suggests to me that the treatises were sold individually and bound by the customer. I came to the opposite conclusion on the NvLN copy with only three treatises. There is no stab sewing apparent and it is the only collection I have seen with no copy of Whist. Further, none of the three treatises present are autographed, another unique find. The most probable explanation is that this was originally a collection in a publisher's binding, but had been rebound at some point without the signed whist treatise. The book is now sadly incomplete.

I believe the other 14 copies are all Osborne collections, originally sold in publisher's bindings. There is no evidence of stab sewing and the bindings, at least those that are original, appear to be similar. To get a sense of Osborne's pattern of production, I sorted the remaining 14 by their contents: Whist.6 or Whist.7? Piquet.1.2 or Piquet.2? Quadrille.1.2 or Quadrille.2? The books break into five groups and begin to look a bit more regular: 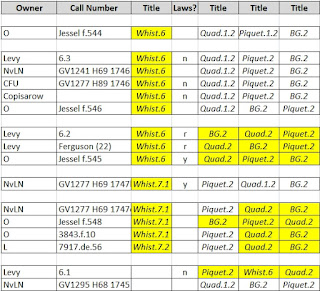 The first group has Whist.6 as the only autographed book together with Osborne reissues of Cogan's Quadrille and Piquet. I am told that the copy at the Library Company of Philadelphia, shelf mark Iu Hoyl Allen 333, is identically made up, as is the one at the library of the American Contract Bridge League.

The next group substitutes Osborne's second edition of Piquet, while the third group has second editions of both Piquet and Quadrille. I've never seen a copy with the Piquet.1.2 and Quadrille.2, suggesting that Piquet might have been reprinted first. On the other hand we have the fourth group, a single copy containing Whist.7.1 (1747) and Quadrille.1.1 (1745) when we know Quadrille was reprinted in 1746. Perhaps it is dangerous to infer the order of printing and all we can infer is that Osborne had mixed inventory on hand from which he created the collections.1

The data cluster in two other ways. The pattern of autographs varies, with only Whist signed in the first two groups2, all treatises in the third group and all but Piquet generally signed in the fifth. [Aside: Note that this pattern suggests that it was a signed copy of Whist.6 that was removed from the incomplete NvLN copy and it would have belonged to the second group.] Secondly the Laws appear in the third and fourth groups, though I failed to collect all the necessary data. Perhaps with the other groups, the Laws were not bound in, but given separately to the customer. Finally we can see that although Whist, the most popular title, always appeared first, the order of the other treatises could vary.

There are at least another ten copies in other libraries, but I have not yet seen them or received detailed information from the institution, as the bibliographer's mantra says I must. Unless the additional copies change the story, my plan is to list these five groupings in my bibliography as issues, denoted something like Osborne.A through Osborne.E.

Finally, an additional word on the curious copy in the British Library. The makeup is typical of the last group, consisting of Whist.7.2, Piquet.2, Quadrille.2 and BG.2 bound together. The whist volume is curious—it is clearly Whist.7.1 with the title page cancelled and replaced with one from the "tenth" edition of Whist, dated 1750! My suspicion is that Osborne discovered this book in his shop in 1750 and felt he couldn't sell the older edition dated 1747 when the current offering was dated 1750. So I believe Osborne put a new title page on the book and sold it as though it were current. Finding more copies might clarify this oddity!

Well, this has been a long essay, even longer if you consider it along with the previous essays on the Osborne publication of individual treatises and my dispute with Bowers. I hope I have accomplished what I set out to do—to bring some order to a difficult and interesting set of books.

1As an aside, let me speculate on how Osborne inventoried these books. He had each of the individual treatises printed, folded, gathered, and warehoused. To make up a retail inventory of individual treatises, it is likely that he'd send the binder a small number to be stab sewn and covered in drab blue paper wraps. For a collection, he'd send copies all the treatises to the binder to be covered in leather (without a collected title page). Most of the inventory would remain unbound at the warehouse, explaining the pattern of physical books we see.

2Hoyle was under contract with Cogan to autograph all of his books for two pence per signature. When Osborne took over the copyright, he paid Hoyle a one-time fee of 25 £ to autograph all books during his lifetime. Given that arrangement, it saves effort for Hoyle to sign only the first work in a collection.
Posted by David Levy at 6:46 AM