The battle between Hoyle publisher Francis Cogan and those who pirated his work is detailed in my article "Pirates, Autographs, and a Bankruptcy." One of Cogan's many strategies to combat the pirates was to extract The Laws of Whist onto a single sheet and sell them separately. On March 5, 1743. Francis Cogan advertised the Laws in the General Evening Post:


At the particular desire of several persons of quality, The Laws of the Game are printed on a fine imperial paper, proper to be framed or made screens of, that the players may have 'em before them to refer to, if any dispute should arise. Price 2s 6d.

No copies of Cogan's Laws are known to survive, although they are mentioned in the Jessel bibliography (item 785) and given a separate listing in Rather and Goldwater (item 10). (See "Where Can I Learn More about Hoyle's Writing?") Thomas Osborne republished the Laws in 1746 as I have discussed them many times, most recently in "An Insomniac's Reward."

Bibliographers do not like to rely solely on newspaper advertisements to support the existence of works which otherwise do not survive. The danger is described in the general introduction to the bibliography The  English Novel 1770-1829:


[This bibliography] includes...titles which have not survived in extant copies and whose existence and further details have been ascertained by printing and publishing records or contemporary reviews, or by a combination of corroborative sources such as advertisements and circulating library catalogues. These last two sources must usually be taken together, as some advertising puffs are not by themselves proof of certain publication (some seem to have been wishful thinking or attempts at relaunches)...[Garside, et al, p6, footnotes omitted.]

A recent exquisite and unusual acquisition seems to provide corroboration for the existence of Cogan's Laws. Let us first concentrate on the object and later connect it with Hoyle and Cogan. It is a ladies fan, printed and hand painted on skin, with carved ivory guards and sticks. Be sure to click on the image to enlarge it. Note especially the intricately carved figures on the guard on the right of the fan.


The fan shows two elegantly dressed couples playing whist. The gentleman on the right is playing a court card, I believe a knave (jack). Quitted tricks are visible on the green baize top to the carved wooden gaming table.

To the left is a servant bringing a carafe of wine and glasses to the players. A young woman carries a stick on which an exotic bird perches.


The ivory sticks are delicately carved with four figures in the center, surrounded by lacy floral patterns and two ornamental flower pots. These detailed images (all of which can be enlarged with a mouse click) should give a sense a the beauty of the fan.


My essay "The Fans of Hoyle" looked at two fans from the 1790s with printed text taken more or less from Hoyle. There I noted that a 1735 law required the name of the publisher and date of publication to appear on the fan. As can be seen in the detail below, the whist fan was "Published by M. Gamble, May 3, 1743. According to the late Act." The British Museum website shows other examples of Gamble's work. 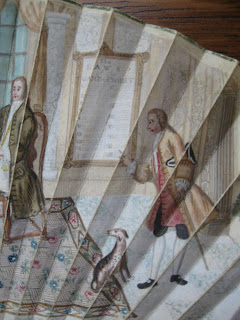 One final detail, at left, lets us connect this fan to Hoyle. A gentleman with a tri-cornered hat and walking stick consults a framed sheet called The Laws of the Game of Whist hung behind the table. Gamble must have copied these from Hoyle's laws as published Cogan: Only Hoyle was writing about whist at the time and it was Cogan's idea to publish the Laws "proper to be framed," perhaps inspired by a similar example of chess laws published 125 years earlier (see "Chess, Hoyle, and a Bibliographer's Speculation"). The image in this fan corroborates the existence Cogan's Laws of Whist.

Gamble did take some artistic liberties in showing the laws.
Hoyle's first edition of Whist contained fourteen numbered laws. In the second edition (announced in advertisements in March 1743, including that of the 5th mentioned above), the laws were expanded to 25 in number. The additions were another part of Cogan's marketing strategy against the pirates, permitting him to advertise a new work "with great additions". Here, there are but 18 laws, with no legible text to compare to Hoyle's writing.

This lovely fan, dated just two months after the advertisement for Cogan's Laws, corroborates their publication, despite the fact that no copies are known. I will certainly include the Laws in my bibliography of Hoyle. Now if only we could find a copy!