In part 1 of this essay, I presented a puzzle. The London Morning Post of January 3, 1794 contains an advertisement for three books by the pseudonymous "Bob Short", a strong suggestion that all three were written by one person. Yet, the books on whist and quadrille are reliably by Robert Withy, while the third, The Religion of Nature, is attributed to the dissident poetess Anna Letitia Barbauld (née Aikin). As a result the gaming books are sometimes attributed to Barbauld as well. Let us try to sort this out.

I got a digital copy of The Religion of Nature and learned that the text was first published anonymously as a letter to the editor of the Morning Chronicle of November 29, 1793: 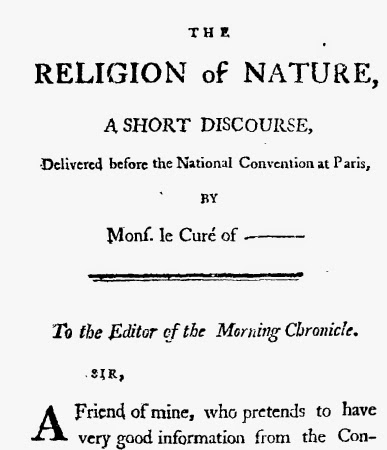 It was reprinted with an introduction (about which more later) as The Religion of Nature, A Short Discourse, Delivered before the National Convention at Paris by Mons. le Curé of ———, still without attribution to Barbaud. This is the book that was advertised with Whist and Quadrille by Bob Short.

What is the basis for the attribution to Barbauld? I borrowed some of the many texts on Barbauld from the library and consulted a number of reference works on pseudonyms, but did not learn why Barbauld is given as the author. I then posted a query to the rare book listservs, Exlibris-L and SHARP-L and got a number of useful pointers. Professor William McCarthy pointed me to his biography Anna Letitia Barbauld, Voice of the Enlightenment, Baltimore Johns Hopkins University Press, 2008.

There I learned that the text of The Religion of Nature was reprinted under two more titles. First, it appeared as The Patriotic Clergyman in the early 19th century in a number of chapbooks and miscellanies. I checked WorldCat and Google Books and located many editions:
Undoubtedly, many, many more reprints exist.

Some of the reprints attribute the piece to Barbauld—the section title of the first is pictured below. The text is the same letter originally published in the Morning Chronicle with a new first paragraph. It is "attributed" to Mrs. Barbauld; in the 1806 edition the title page indicates the piece to be hers. These are not, however, convincing attributions. How did the publisher identify Barbauld as the author?

It is the two-volume set The Works of Anna Laetitia Barbauld, London: Richard Taylor, 1825 (available from Google, volumes one and two) that makes the attribution certain. It was compiled by Barbauld's niece Lucy Aikin who had access to a great deal of private material about her aunt. The letter appears in volume two, pages 260-7, under yet another title, The Curé of the Banks of the Rhone, with the notation that it was written in 1791. The text matches that of the letter to the Morning Chronicle.

With the appearance of the letter in her niece's collection of Barbauld's works, I accept the attribution and am left with the need to explain the advertisement consisting of Withy's gaming books along with Barbauld's letter.

The explanation is, I'm afraid, rather prosaic. Let us return to The Religion of Nature, the work causing all the confusion. Pictured below are the title page and introduction for the copy at the University of London Goldsmiths' Library. What I am not showing is a handwritten annotation on the front fly leaf "by Anna Letitia Barbauld", another attribution without evidence.

The title page indicates that the "short discourse" was delivered by "Mons. le Curé of ———" and it is "the short address to the jurymen of Great Britain", that is the introduction, that is by "Bob Short". The former is Barbauld and the latter must be Withy. Note the annotation "Withy" next to the name Bob Short on the title page. I am not the first to reach this conclusion, although I hope mine is better documented.

The introduction is signed Bob Short at Baker's Coffee-house, December 22, 1793. This is just as he signed the introduction to Quadrille, pictured at right: Baker's Coffee-house, January 1, 1793. I wish I could see a physical copy of The Religion of Nature. From the reproduction, it appears quite similar to the contemporary copies of Whist and Quadrille I have seen. All have an oblong format and the type and layout appear similar.

Indeed, Withy carried on his trade at the coffee house:


...Robert Withy...transacts as usual, all the branches of this business, and attends at Baker's Coffee-house, Change-alley, every day from one to three. (Morning Herald, October 23, 1799)

The conclusion is that Withy wrote the introduction to Religion as "Bob Short" while Barbauld wrote the text. My strong suspicion is that Withy, a former seller of books and prints, published all three pamphlets, explaining the advertisement linking all three books. We can say with certainty that Robert Withy and not Anna Letitia Barbauld was the author of Whist and Quadrille. Establishing that fact was my primary goal although I greatly enjoyed the detour provided by Barbauld. She was a remarkable woman—dissident, poet, educator and more.

Professor McCarthy left me with some interesting questions about Withy and The Religion of Nature:

I cannot answer these questions, but perhaps some readers can help?

If you're still not convinced about Withy's authorship of Whist and Quadrille, stay tuned for a brief part 3 coming shortly!
Posted by David Levy at 8:54 AM