2017 was another quiet year in collecting. The highlights are two London Hoyles, two translations, and a couple of books that competed with Hoyle.

First, an anecdote, and a book that is more of a curiosity than a highlight. There's an old chestnut in the rare book world: A customer calls up an English book dealer, saying "I have a book by Churchill's chauffeur. Is it worth anything?" The dealer, perhaps with eyes rolling asks, "By any chance is it autographed by the chauffeur?" The customer, excitedly, "Why yes! Yes it is!" "So sorry," replies the dealer. "Autographed copies are a glut on the market. It's the unsigned ones that are rare."

With that in mind, I acquired a "twelfth" edition of Hoyle's Games, described here. I've written about the authorized "twelfth" and its piracies, noting many differences. The most salient is that the authorized editions are signed by Hoyle and by the lead publisher Thomas Osborne; the piracies are not. Well, here is a twist--a book that is authorized, signed by Osborne, but not signed by Hoyle. The condition is terrible, but the price was commensurate, so I'm amused to have this copy and will always associate it with Churchill's (presumably fictitious) chauffeur.


Back to the more serious purchases. The best single item is a substantial condition upgrade, a copy of Whist.3 (1743) in the original Dutch paper wrappers. Francis Cogan advertised his books as "done up in fine gold embossed paper" and this is what he meant. I am reliably informed that such papers were actually made in Germany and the common term "Dutch" is a corruption of "Deutsch." I like nothing better than a book in its original binding.

This was the second book to be autographed by Hoyle.


The other Hoyle is an abridgement from the early 1780s, one I write about in the essay "An Epitome of Hoyle, a Discovery, and two Coincidences."  I'd never seen a copy for sale before and it was a treat to add this to the collection.

As my collection of London Hoyles grows more advanced, the biggest opportunity for me is continental translations. In 2012, I had written that I was not aware of any Italian translation of Hoyle's Whist. I have since identified an 1821 Milan edition that came bound with an almanac. I found a copy for sale and was surprised to see that it was in an original binding and did not include the almanac. The two books have different title pages, but otherwise the same setting of type. Hence they are two bibliographical issues; mine seems to be the only extant copy without the almanac.

As I noted in another 2012 essay, Hoyle was translated into French more often than any other language. Sometimes, Whist was published as a stand-alone text. Other times it was included in the various editions of the Académie des Jeux. The translation at left was published in Belgium in 1773. All three copies I have seen, mine included, are bound with a 1774 copy of Greco's Le Jeu des Échecs translated from Italian. The book was reissued with a cancel title in 1781 with the imprint "Paris : Les libraires associés."

Most of the card games from the Académie des Jeux were translated into English as the Academy of Play. The translation did not include Hoyle, avoiding potential copyright problems in London. In fact, the Academy of Play competed with Hoyle and was published both in London and Dublin in 1768. The Académies presented only rules for games and not strategy, as noted in the footnote at right below.

The note identifies the need for a manual on the game of Quadrille, dismissing Hoyle as "nothing more than instructions for the better playing of those, who have already learned the Game; for it is impossible for any one to form any idea of the game by what is there laid down." Yes, strategy is what Hoyle was about, and the footnote has an ironic sound to me. 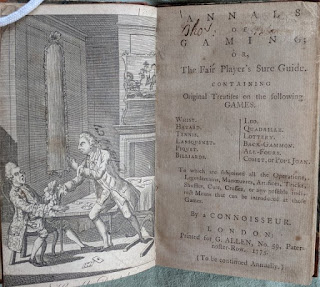 There were a handful of lesser acquisitions and an interesting book on the way, but that will have to wait for another time.