The First Piracy. Part 3: Variants in Gathering A

From parts one and two, the story so far:
Even though there is only one setting of type for gathering A, there are interesting variants to be discussed in this essay.

First a short digression that will make sense only to those who have studied physical bibliography and imposition schemes.


<biblionerd> An octavo in fours can be imposed in two way. In "work-and-turn", all pages of one gathering are set in a forme. It is printed (worked) on one side, the paper is flipped (turned), and the other side printed. You end up with two copies of the same gathering.

The Webster piracy was printed work-and-turn1 so that a setting of type corresponded exactly to a gathering. Our story would be much more complicated if the book were printed the other way. In an early draft of this I showed the two imposition schemes and how I was able to determine that it was printed work-and-turn. I left it out of this final version because (a) it distracts from the story I'm trying to tell; and (b) only a small handful of you would care. </biblionerd>

On to gathering A.

Of the 44 copies I know about, 12 lack a half title. The most common half title, appearing in 25 copies is this:


Notice the word game is in small caps--that is a large capital G followed by smaller, but uppercase letters: GAME. The second most common half title appears in 6 copies:


There are lots of obvious differences from the first variant, but the clearest is that "game" is in all capitals without the larger initial "G".

For those of you keeping score at home, I've accounted for 43 of 44 copies. Here's a final variant appearing in one copy only:


The final variant looks odd. The type does not appear to be from the 18th century. The book is from the United States Playing Card Company/George Clulow collection at Vanderbilt. Clulow had many of his books rebound by fine 19c binders such as Ramage and Root & Son. This copy was bound by Root and like many Victorian bindings of the era, this copy is tightly bound. I cannot determine if the half title is conjugate to A4. My guess is that Clulow asked the binder to insert a facsimile half title to replace one that was missing. The practice of "perfecting" a book by adding missing pages was a fixture of 19c book collecting. As I said...this is a guess, but I will make no further reference to this oddball half title and treat as though it were missing.


These are the same setting of type. For example, look closely at the second paragraph beginning "Calculations, for those..." Note the large gap between "Bet" and "the" in both variants. On the line below, look at the gap in the final "the."

There are some differences. The "R E A" in Treatise on line 2 have drifted right in variant 4. Note the "A" appears directly over the "G" in "Game" in 1 but to the right in 4. More important are the added lines, a rule and "The SECOND EDITION" at the bottom of the right-hand example. The insertion has changed the vertical alignment throughout. Variant 4, the so-called "second edition", was printed after variant 1.

As a double-check that the type was the same, I photocopied variant 4 on a transparent sheet and laid in on top variant 1. With the changes in vertical spacing, I had to take many photos to get the type to align: 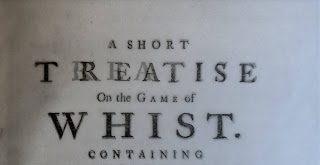 Let us compare variants 1 and 2:

The main difference I see is that "TREA" in "TREATISE" on line 2 have shifted to the right. There is a bit of type movement along the right margin in the final lines. The rest looks unchanged.

As we move from 3 to 4, the "T" in "TREATISE" has moved back left. The spacing looks better, though still imperfect. Perhaps the change was deliberate.

The "T" stays left, but the edition statement is added and everything is realigned vertically.

I conclude that there is one setting of type with changes in the press, some accidental and others deliberate. The movement in type and the addition of "Second Edition" lets us sequence the four variants as I have numbered them.

We can also discern sequencing in the Advertisement on A3r:


These two pages will give you a chance to read the beginning of the amusing Advertisement. They are the same setting of type, but something has happened along the right margin at the bottom of the page. In the word "Manner" at the end of the third line from the bottom, you can see the "r" has drifted up in the right-hand copy. One line down, the semicolon after "Undertaking" has disappeared and is replaced by a hyphen, which came from the "pre-" in the line below. Down another line you see that "pre-" picked up the final "l" from the catchword "vail" which has turned to "vai,". Where the comma came from, I cannot say.

The correct page, the one on the left, was printed first and the type shifted in the forme at some point, introducing the anomalies seen on the right.

In the next essay, we analyze what we have seen.

1To learn more about the two imposition schemes and the challenges in distinguishing them, see Povey, "On the Diagnosis of Half-sheet Impositions," The Library, 5th ser. 17 (1962) 197-212, reprinted in Jones, ed., Readings in Descriptive Bibliography. Kent State University Press. 1974.

2Carter and Barker, ABC for Book Collectors. Eighth Edition. 2004.
Posted by David Levy at 9:40 AM