Well, sometimes things don't work out as planned. I was hoping this essay would include a lovely Hoyle I won at a November 25 auction in Germany. Sadly, shipping was delayed due to the resurgent pandemic and the book hasn't yet reached the US Postal Service. On the other hand, I won four lots totaling 14 books (some real gems!) in a December 16 auction in the UK and those books arrived yesterday. But I'm not ready to write about them yet!

So we're left with a short essay discussing two other late 2021 acquisitions. Regular readers will know that I love original bindings and I love manuscripts. You'll see one of each today. Two things unite the books: both are interesting for reasons other than their text and both are one-of-a-kind.

The first item is a stitched pamphlet, never bound, on the game of piquet.

It is a word-for-word reprint of the chapter on piquet that appeared in Almanach des Jeux, published by Fournier in Paris annually from 1779 until 1790 or so, and sporadically thereafter. The text is, therefore commonplace, but many other things fascinate. First, it is an uncommon provincial reprint--from Bruyeres, rather than Paris. Second, it was printed Chez la Veuve Vivot, that is at the shop of the widow Vivot, who succeeded her husband Jean-François. As in England, women who could not themselves set up a business, could carry on that of their husband. Third is the binding--stab sewn and never put into the sort of fancy binding that French collectors love. Finally, as near as I can tell, the book is unique. I can find no recorded copies in any of the online library catalogues.

Another one-of-a-kind find is a manuscript on the game of trictrac. The title is Le jeu du trictrac, comme on le joüe aujourd’huy. Enrichy de Figures and the text is taken from on of the many "Amsterdam" imprints of Académies des Jeux, though it was likely printed in Paris. The Académies  appeared with great frequency from the 1750s into the late 1780s.

The manuscript is 194 numbered pages followed by a table of contents. I believe it is a quarto gathered in eights. It is 22.5 x 16.2 cm, the chain lines are horizontal, and the watermarks are where one would expect for a quarto, but each signature is eight leaves. I don't think I've seen that format before.

The handwriting is precise and readable. The scribe reproduced in ink illustrations of the trictrac board that were woodblocks in the Académies:

They are quite lovely!

I'm not quite ready to date the manuscript. It appears to be circa 1800, but I suspect more can be learned from the paper with the digital subtraction techniques shown in the previous essay.

A final mystery is the inscription on the final page: 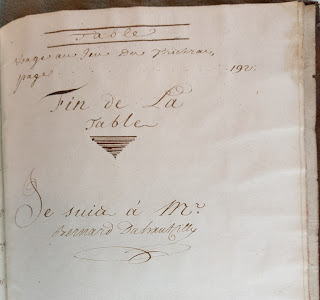 The final bit reads "Je suis à Mr. Bernard Duhaut-Cilly." There is a large family with the surname Bernard in Bretagne who added "du Haut-Cilly" to their name when they entered the nobility. The family included the explorer/trader Auguste (1790-1849) who visited California in the 1820s. A friend in Paris suggested the most likely candidate is Robert-François Bernard, sieur du Haut, who died in the late 18th century.