Cancels are a frequent in eighteenth century books and they are a lot of fun for bibliographers. So, with apologies to Rod Stewart, we will look at the story told by some cancels in an 18th century Hoyle.

What is a cancel? It is inevitable that errors are discovered after a book has been printed. Often errors are corrected in a list of errata added to the work. More dramatically, when the author or printer or publisher could justify the added expense, erroneous leaves could be cancelled--removed from the book and replaced with substitutes. When a leaf was to be cancelled it was generally slashed at the printer's shop with a knife. The printer would print a replacement leaf and send it to the binder along with the unbound book. The binder would trim away the defaced sheet leaving a small stub at the gutter and paste the replacement sheet to the stub (Gaskell pp134-6). The cancel is thus a physical fact about the book, one the bibliographer is expected to identify and describe.

More interesting than the fact of the cancel is reason for the cancel. Did the author change his mind? Were there serious errors in setting the type? Was there concern about libelous, offensive, or seditious material? Often, the question cannot be answered--all that survive are copies of the corrected book and the reasons for correction remain a mystery. Other times, the binder forgot make the substitution in a particular copy and by comparing it with a more common corrected copy, we can figure out the change and the reason for it. This is another application of the bibliographer's mantra--examine as many copies as possible.

With that background, we can consider the cancellations in Hoyle's The Polite Gamester (Dublin: James Hoey, 1776), where the reasons for change are commercial and more prosaic. The Polite Gamester was the title used for Irish reprints of Hoyle, and is a clear reference to the gaming book that Hoyle drove out of the market, The Compleat Gamester, published from 1674 to1754. The Irish reprints were technically not piracies as the copyright law, the Statue of Anne, did not apply to Ireland. The Polite Gamester of 1776 contains many cancels. The book has an overall title page (pictured at left), and each individual treatise has a separate title page. Each of the title pages is a cancel--the stub is particularly apparent in one of the section titles below. 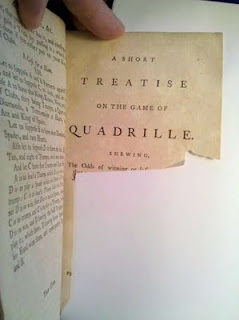 Interestingly, in my copy, one of the section titles that was intended to be cancelled was not. The disfiguration should have alerted to binder to the cancel, but the binder missed this one. This is a rare survival and one that I cherish as a collector.

What is the reason for the cancellation of all the title pages? 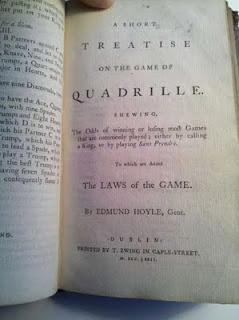 To answer that question, we turn to the previous version of The Polite Gamester (Dublin, T. Ewing 1772). If you compare the 1772 and 1776 versions, it is clear that they are the same setting of type throughout. Compare for example the slashed section title above with the complete section title from the 1772 book at left.

The effect of the cancels is to change a 1772 Thomas Ewing book into a 1776 James Hoey book. Why? Thomas Ewing died in late 1775 or early 1776 and James Hoey must have acquired the unsold copies of the 1772 Polite Gamester.  He changed the title pages not out of vanity, but because the title page tells the customer where to purchase the book, no longer from Thomas Ewing on Capel Street, but from James Hoey at the Mercury in Parliament Street.

A bibliographer would call these two books the same edition, as they are mostly from the same setting of type. The later book is a different issue, as it was sold at a different time with a different title page. (Gaskell p315). We will see many similar reissues in the Hoyle cannon.