In my last essay, I discussed how English copyright law turned on its head with the 1774 decision in Donaldson v Beckett. Perpetual copyright was gone and Hoyle, one of the best sellers of the 18th century, was suddenly in the public domain. 1775 was to be an interesting year! 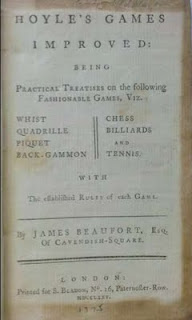 On June 2, there was an advertisement for Hoyle's Games Improved, edited by James Beaufort, pictured at left. It was a near verbatim reprint of the "fifteenth" edition of Hoyle with additional chapters, presumably written by Beaufort, on billiards and tennis. It was a very cheaply printed book that was to see a second London edition in 1788. It later became the first American book on card games in 1796, issued in Boston, New York, Philadelphia, and .

On June 9, one week later, the "sixteenth" edition of Mr.Hoyle's Games was advertised. It was the last to bear the name of Thomas Osborne in the imprint. Osborne died in 1767 and this was printed by assignment from him for thirteen copyright-holding booksellers led by Rivington, Wilkie, Crowder, and Baldwin. Hoyle had died in 1769 and, like the "fifteenth" edition (1771), his signature appears as a woodblock print. The advertisement disparages what was likely the Beaufort edition:


This is the only genuine edition of Hoyle's Games, with his last corrections and improvements; and the proprietors cannot help giving this caution, that any copy of this book, not signed "Edmond Hoyle," at the back of the title page, is not to be depended upon as Mr. Hoyle's whatever may be pretended to impose upon the public. 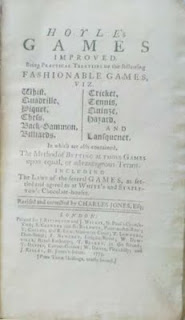 A month later, a nearly identical consortium of booksellers headed by Rivington, Wilkie, Crowder, and Baldwin changed their marketing strategy and came out with their own Hoyle's Games Improved, edited by Charles Jones. It reprinted Hoyle, adding Billiards, Cricket, Tennis, Quinze, Hazard and Lansquenet. No longer did they seek to disparage the Beaufort edition, but added more and more games, a strategy that becomes more apparent with the 1779 edition edited by Jones, a book well worth its own essay. Further Charles Jones editions appeared in 1786, 1790, 1796, 1800, 1803, 1808, 1814, 1820, and 1826.

I need to do more work on the final version of Hoyle from 1775. The Annals of Gaming appeared that year, but I have found no newspaper advertisements, so I cannot say when it appeared in relation to the others. It consisted of extracts from Hoyle, with chapters on the games of Hazard, Tennis, Lansquenet, Billiards, Loo, Lottery, All-Fours and Comet, and Pope Joan. The author is given as "A Connoisseur"and portions of the work apparently were printed in Covent Garden Magazine, a periodical which began publication in July 1772. As I said, more work is required.