As I did in 2013 and 2014, let me share new acquisition highlights for the past year. The count is five 18th century editions of Hoyle, two from the 19th, and a bevy of other gaming works.

I have already written about two of the non-Hoyles in the essays "The Left Hand of Bougy: A Trictrac Manuscript" and "Le Grand Trictrac". A third book is the 1754 and final edition of The Compleat Gamester, one that I noted plagiarizes substantial portions of Hoyle. I do like the frontispiece by Parr which first appeared in the seventh edition of 1750.


But let's move onto the Hoyles where there are four juicy finds (the fifth was a condition upgrade). I wrote about the Peter Wilson editions of The Polite Gamester in "A Copyright Fight in Dublin". The new acquisition is the second issue, now sitting next to my copy of the rarer first issue. These two are described in my online bibliography here and here.

What distinguishes the first issue from the second? It is the addition of pages 39-46 which were printed after the rest of the book. Note the "finis" at the bottom page of 38 and the continuation on page 39 with "additional cases at whist, never published till 1748."


"The Pigott Hoyles" edited by Charles Pigott were published posthumously and the early editions are quite scarce. The first edition survives in a single copy at the Bodleian. That book was reissued with an addenda and until 2015 I knew only of a copy at the Bodleian. How I came to acquire a second copy is one of those charming collector's stories.


I spent three weeks in Ireland this summer, two with Bibliotours and one doing research at Trinity College, the National Library of Ireland, and Dublin City Libraries (see my essay "Schools for Whist" to learn about their unique Hoyle-related item). During the trip I visited a handful of rare book shops, but found nothing to bring home. A few days after I returned home I got an email from a friend who saw the Pigott Hoyle listed in the catalogue of a Dublin book dealer. Well, the dealer was actually a bit outside of Dublin and did not keep an open shop, so perhaps I can be forgiven for not finding the book on my own. In any case, I do think of the book as a souvenir from my travels.


I found the next Pigott Hoyle on eBay this year. It is styled a "fourth" edition, but seems to be a second edition which seems to have been published in 1797. Still rare, there are copies at the British Library, Standford, the John White collection at the Cleveland Public Library, and the one pictured at right. 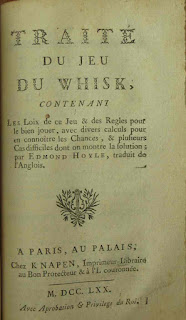 Lastly, a French translation of Hoyle. It is published by Knapen and dated 1770 and appears at the end of a 1763 Académie Universelle des Jeux purportedly printed in Amsterdam without a publisher. That is suspicious--18th century books in French with an Amsterdam imprint were often printed in Paris. The false imprint was intended to evade licensing laws.


There are an uncountable number of mysteries about this French translation. It seems never to have been issued separately from the Académie. A friend also has a copy with a 1763 Académie and it seems to turn up with a 1770 version as well, though this time with a Knapen imprint. But even stranger is that my copy with a 1763 Académie is at least in part different type from that of my friend. Really, one needs to compare all these books side-by-side to figure out what is going on.