Fifth Anniversary: The half-year in collecting

Today marks the fifth anniversary of this blog. Most of my energy is devoted to the descriptive bibliography of Hoyle, substantial portions of which are now online. But I don't want to neglect the blog entirely.

So let me share a recent purchase, a condition upgrade to a book I wrote about in the essay "The Scottish Hoyles (part 2)". It is Hoyle's Game of Whist printed in Dundee Scotland by W. Chambers for booksellers in London, Edinburgh, and Perth. It is the only miniature Hoyle with a text block that is 3 1/8" tall. While my copy was in satisfactory condition, it had been rebound. 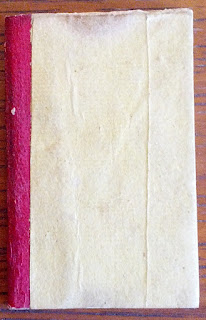 The new copy is in near mint condition with the original binding of goldenrod papers and a red leather spine. Interestingly, the binding is different from that of the copy at the National Library of Scotland (pictured in the previous essay), also original. Perhaps each of the three booksellers issued the book in different bindings. Note the crescent of discoloration to the top of the book. Can you identify the cause?

The discoloration is from the thumb-hole of a slipcase. Yes, this charming miniature was issued in a slipcase! See the pictures below of couples dancing at a ball and a foursome playing at whist. Rather charming, don't you think? 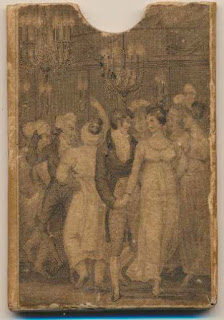 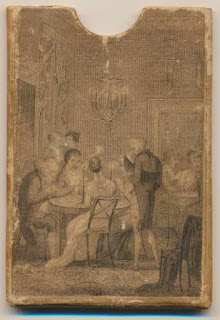 I've written about Hoyles in slipcases a couple of times. First in "Late Hoyles, Early Slipcases" I discuss two examples, one from 1802 and another from 1803. And in "An Epitome of Hoyle, a Discovery, and two Coincidences" I discuss a very early slipcase from the early 1780s.

It is an interesting question why publishers decided to go to the expense of making the slipcases. A comment from the 1803 work suggests that the goal may be to appeal to women:


The proprietors of Hoyle's Games Improved, ambitious of retaining that patronage which those who endeavour to serve or amuse the public generally acquire, have had the whole work carefully revised and enlarged with, as they hope, material corrections throughout; and supposing that the same might with propriety be divided into nearly two equal portions, one calculated for the card table, and most suitable for ladies, the other appropriate to the male sex, as containing games that require stronger exertion or more intense application; the proprietors consequently now first publish, in a convenient size and elegant manner, that part which they trust will prove most acceptable to their fair country-women, intending soon to print the rest in a similar form, so as to give a complete edition of a book containing the most fashiable games, both of skill and chance.

My copy of the Dundee Hoyle made six known copies and it was the only one in the slipcase. However, shortly after I purchased it, another copy came to auction as part of a shelf lot of 19th century bindings. So now there are seven, two of which are in slipcases. Perhaps the seventh copy will appear in the trade before much longer!
Posted by David Levy at 7:59 AM