Piquet, Provenance, and a Puzzle

updated December 17, 2016 with details about the British Library copy of Ombre.

updated November 29, 2018 with the location of the puzzle solution.

In 2013, 2014, and 2015, I wrote year-end essays highlighting new acquisitions. I've made sporadic interim updates on particularly noteworthy books: a trictrac manuscript and a Scottish miniature in a lovely slip case. I expect to do a year-end piece for 2016, but just acquired a book so delightful that I couldn't wait to write about it. 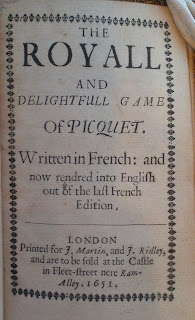 Last month in New York, Sotheby's auctioned selections from the Fox Pointe Manor Library. I bought The Royall and Delightfull Game of Picquet (1651), a book I have written about before.

Predating Hoyle by nearly a century, it is the first instructional book on a card game in English. It is instructional in that it provides rules for how to play the two-handed card game of piquet. In 1744 Hoyle wrote the first book of strategy for piquet (mentioned here). I treat the distinction between rules and strategy in parts one and two of an essay on the nature of gaming literature.

The description in the Sotheby's catalogue was sparse:


I did a great deal of research about the book before bidding. I learned that there were only two institutional copies, one at the British Library (the one digitized for EEBO) and another at the Folger.

I found the book listed in the two standard gaming bibliographies by Horr and Jessel (see my essay "Where can I learn more about Hoyle's writing?"). The entry in Horr was odd:


It's clearly the correct book, but the publisher is not Tuckett, but Martin and Ridley. Then again, Horr had not seen many of the books he described. I know that he did not consult the British Library for his 1892 bibliography—it omits many, many gaming books that were in the library at the time—and the Folger was not established until 1932. So, at least initially, it was unclear how Horr even knew of the book.

Jessel, on the other hand, a Londoner, would have visited the British Library for his 1907 bibliography, and his description is more precise:


After consulting the bibliographies, I turned next to auction records, private library catalogues, and bookseller catalogues. I found that architect Sir William Tite owned a copy that was auctioned by Sotheby's in May 1874:


The purchaser was the London bookseller Quaritch for £2 15s. Note the binding description: "tree-marbled calf extra, g. e. by Tuckett." "Extra" would mean extra decorative tooling and "g. e." would mean that the edges of the pages were gilt. And Tuckett was not the publisher, but the binder! Clearly Horr had seen this auction catalogue or the description in the 1877 Quaritch catalogue:


and mangled the description. Typical Horr! Note that Quaritch had only a modest markup on the title from £2 15s. to £3 3s. Compare that to their much larger markup of gaming literature from the 1928 Rimington-Wilson sale.

Picquet also shows up in the Aldenham Library, described here in an 1888 catalogue:


Ah, Henry Hucks Gibbs, Lord Aldenham! He has appeared a number of times in this blog, most notably in the essay "From the pen and library of Henry Hucks Gibbs." He was a superb collector of much more than gaming literature and a member of the oldest society of bibliophiles in the world, the Roxburghe Club.

The description of the Aldenham copy is interesting because it notes that 12 pages on the game of Ombre are bound with it. That book is The Royal Game of the Ombre (1660), a rarity with only one copy known at the British Library. Sotheby's auctioned the Aldenham Library in 1937 and the Picquet/Ombre volume was sold to a bookseller named Edwards for £4. The catalogue is too recent to be available on Google books, but I was provided information from a database of auction prices realized.

I could find records of no other copies. It seemed possible that the Fox Pointe Manor copy might be the Tite copy, although there are discrepancies in the description (a format of 16mo versus 8mo, for example). It seemed unlikely to be the Aldenham copy, as the catalogue did not mention a book on Ombre bound in. In a perfect world, I would examine the book before the sale, but geography intervened.

Armed with my research, but no recent sales information, I was ready for the auction. I bid live online against one other active bidder and was successful within the limit I had set for myself. Then the waiting...

The book arrived a week and a half later and I first observed the binding, which is indeed lovely. It is "extra" and the edges are gilt. The "grain" effect on the leather is called tree calf or tree-marbled calf.


Looking more carefully at the front pastedown, I find a binder's stamp, "Tuckett Binder to the Queen" matching the catalogue description of the Tite copy.


Indeed, there is a penciled inscription "Tite" on the verso of the front fly leaf, although whether by Tite himself or by, say Quaritch, I cannot say. Other notes include the fact that it was entered into a catalogue and an old sales price of, sniff, three pence.


Clearly, the Fox Pointe Manor copy is the Tite copy.

But there is more! Inside is a quite-familiar bookplate, that of the Aldenham Library—the Fox Pointe Manor copy is also the Henry Hucks Gibbs copy!


His signature appears on the flyleaf "Henry H. Gibbs, St. Dunstans, 1878". I recognize the handwriting from other Gibbs books and letters.


The note in Gibbs hand "bought of Quaritch" completes the story. Sotheby's sold the Tite copy to Quaritch in 1874 and Gibbs bought it from Quaritch in 1878.

When I purchased the book, I suspected there might be as many as five copies: the two institutional copies at the British Library and the Folger, the Tite copy, the Aldenham Library copy, and the Fox Pointe Manor copy. I now see that the last three are all the same physical book, now in my collection.

Two things strike me. First is that Sotheby's sold this book three times, but the most recent description was perfunctory, omitting much detail about the book such as the binder, and the provenance. All of that information was more available to them than to me. I suppose they're not willing to spend a lot of time on books in this price range when they sell others for a thousand times as much, but I think the lazy description does the seller a disservice—someone interested in Tuckett bindings or books from the Aldenham Library would never be drawn to this book.

Second, my research into the provenance of this book was atypically backward. Usually one starts with the physical object and observes indicia of ownership in the book. Here, while doing pre-auction research on other copies, I knew who prior owners were, and was delighted to be able to connect them with my book.

Finally, the puzzle. What happened to the rare pamphlet on Ombre that was at one time bound in with this work?  The Tuckett binding from Tite's day is still intact and there is no evidence that I can see of the removal of any text. What happened to Ombre?

I continued my research and found one more data point, another Quaritch catalogue from March 1878:


There are two differences from the earlier listing. First the price is reduced to £2 16s., barely more than Quaritch paid at the Tite auction. Second, the listing mentions Ombre, and indeed is the earliest to do so. So, to complete the chronology, the description in the 1874 Tite sale and the first Quaritch catalogue of 1877 did not include Ombre, while a second Quaritch catalogue of 1878 and all the catalogues of the Aldenham library do include it. Yet it is not present now in what is clearly the Tite/Aldenham copy.

Any solution is speculative. Perhaps the 12 page pamphlet was laid in, rather than bound in, and subsequently become separated. If so, we can only hope it turns up one day. Perhaps the second Quaritch catalogue and all the Aldenham catalogues are all in error, although that seems unlikely. Perhaps Ombre was removed from the book in a way I am unable to detect.


I checked with the British Library about their copy of Ombre. Perhaps they would have information about the book that would suggest that it was once part of my book. Or perhaps they could confirm that it was not, indicating a second copy of Ombre out there somewhere. They told me that they acquired it by donation in 1978, but have no record of the donor. And that it is unbound. These two data points are consistent with the thought that their copy of Ombre was once part of my book. Or not.


Today Skinner Auctioneers in Boston auctioned another 200 books from the Fox Pointe Manor Library. Lot 173 was the Ombre book that must have been with my Piquet. It is in a modern binding by Pat Bruno of Davis, California. So the owners of the Fox Pointe Manor copy must have removed the laid-in pamphlet on Ombre and had it rebound. The book sold for $6765.00, sadly more than I was willing to pay to reunite the two books.


It turns out that the Clark Library at UCLA is the new owner of Ombre, with their catalogue record here. For details of my 2013 research visit there, see my essay "Hoyles at the Clark."

There a final twist to the mystery. As I mentioned in my essay on Gibbs, he wrote a book on Ombre with three editions in 1874, 1878, and 1902, the latter of which he presented to members of the Roxburge Club that year. He made extensive references to historical Ombre literature throughout the book. For example:


Barrington says in his 'Archaelogia' that Ombre was introduced into this country by Queen Catherine of Barganca. We know that she played the game; for Waller wrote an epigram 'On a card that her Majesty tore at Ombre.' This must have been about 1680; but we have an earlier mention of the game in 'Pepys's Diary' under the date of September 1665. [Gibbs. The Game of Ombre, London: 1902, page 3]

The reference to Pepys did not appear in the 1874 or 1878 editions, but did appear in that of 1902. If Gibbs were aware of an even earlier reference in English, particularly from his own library, wouldn't he have mentioned it here?


Ombre remains a mystery, but Picquet, having graced the Tite, Aldenham, and Fox Pointe Manor libraries, has now found a new home.