2019 was a good year for me as a collector. Since my Hoyle collecting is far along, when I find something I don't have, it must be rare. I'll look first at the best of the new non-Hoyles, then the Hoyles, but first a story.

In the summer of 2017, I took David Pearson's class in Provenance research at the Rare Book School in Charlottesville. We learned about forms of evidence to understand book ownership: inscriptions, bookplates, bindings, heraldry, catalogues, and more. At a break, I told David that I had never marked my books in any way. As I described my collection, he said, "You have some really good books, but most of your books are interesting only because they're part of your collection. If you don't identify your books, that interest will be forever lost." His comment resonated--for example, I have a lot of whist books that are not of great value individually, but I do have 300 of them that together tell the story of the game. He convinced me that I should identify my books.

I contacted some friends who are letterpress printers and came up with the bookplate pictured below. The woodblock ornament is taken from the first edition of Hoyle's Backgammon. Add a border and my monogram (which David described as a mangled Roman numeral), and voila! My friends had a polymer plate made with many instances of the book plate in three different sizes.They printed and cut out lots of plates.

It has been a huge project attaching the plates. In addition to pasting them in the books, I've used the opportunity to make sure that my electronic and paper records are in sync with the physical books. Disclosure: they weren't! I've also added location detail so I can print a shelf list. Finally, I've also had to decide which books are part of the collection and which are not (such as modern books on contract bridge or backgammon).

I have plates in roughly 800 of the 1200 book collection so far. Work continues! I am using a rice paste that is soluble in water, so the process is reversible. If my books are important as a part of collection, they are now mostly identified.

On to the new acquisitions. 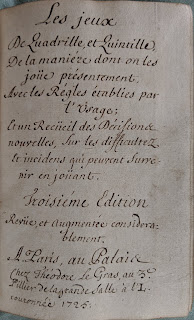 I have a weakness for books in manuscript. We tend to think that once moveable type was introduced, all books were printed. In fact manuscripts overlapped with printed books for a long, long time. For an extraordinary example with a great story, see my essay "The Left Hand of Bougy..." The manuscript on Quadrille from 1725 is, like the Bougy manuscript, copied from an edition of the Académie des Jeux, the French gaming anthology that appeared in one form or another for generations.


Another weakness. And another book on Quadrille. I've written many times how I love books in original unsophisticated bindings. See, for example here, here, here (second from the top), and here. The book on Quadrille at left predates Hoyle; I mention it in the essay "Piquet and Quadrille Literature." I acquired the copy at left at auction this year. It is a pamphlet that has never been bound and retains the original stab sewing. Lovely!


And now the Hoyles.


What is remarkable about the book is that it is the first I know to illustrate the use of tokens for keeping score at whist. In the essay "Hoyle's Scoring Method and Whist Counters," I discuss whist scoring tokens. I suggest in that essay that the first mention of scoring with tokens was in the 1791 chapbook Short Rules for Short Memories at Whist by "Bob Short" (Robert Withy).  I still believe that to be the case in English, but I've since found scoring discussed in three 18c Portuguese editions (1753, 1768, 1784), and a Russian edition published in St. Petersburg (1769). The Russian edition purports to be a translation from a French edition, but the tokens are not illustrated in any French version I have seen.


The two new Hoyles in English are both reissues of books I have already, but with cancel titles. The first is discussed in "Reissues of Mr. Hoyle's Treatises (1748-1755). With this 1755 reissue, I have four of the five different issues.


The final example is a Dublin reissue of the Polite Gamester from 1783. It was originally published by Thomas Ewing in 1772. Ewing died in 1775 or 1776 and James Hoey took over his stock. Hoey reissued the book with a cancel title in 1776. See the essay "Every Cancel Tells a Story, Don't It (part 1)" for pictures and more detail.

I can't say why Hoey put a new title page on the book in 1783. The imprint is the same as is his address, 19 Parliament Street. Probably, he wanted to make the book look more current with a new date.


It's a bit beaten up, but the only other recorded copy is in the John White collection at Cleveland Public Library (discussed here), so I have no complaints.