I shared most of the 2020 acquisitions in an earlier essay, but saved one book, two manuscripts, and some exonumia for this second part. The book is an unusual one for me--a 17c Italian work on the game of Ombre:

It seems there are two different books, although Lensi and the Tuscan library disagree about format--a 16o or a 12o. It's a bit hard to sort all this out during the pandemic, but as libraries reopen, I'll send some emails and try to assess differences.

My copy is 13.9 cm tall and is bound in vellum as pictured at left. And if I get bored of biblio-mystery, I can always try to decipher the inscriptions on the fly leaf and title pages.

Next, the manuscripts. I talked about one 18c trictrac manuscript in "The Left Hand of Bougy." I have another which I've never written about on this blog, but is pictured as item 7, here. I found two more trictrac manuscripts, likely late 18c, at an auction this summer. I haven't studied them in depth, but the text does not appear to be copied from any printed book, although the content of both is typical of instructional trictrac books, enumerating the complex rules of the game. The first is titled "Extract of the most general rules and observations on the game of trictrac." 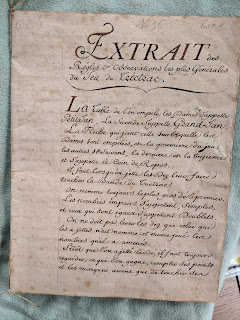 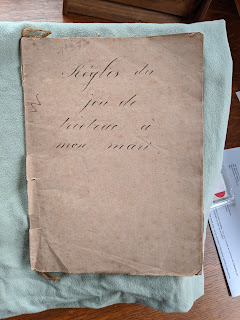 The second manuscript has a somewhat battered cover with a title that I find charming: "Rules of Trictrac according to my husband". 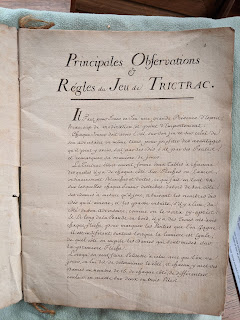 The text has the more pedestrian title "Principal Observations and Rules for the Game of Trictrac."

And now onto the exonumia. Holabird Americana has been selling the vast token collections of Benjamin Fauver. They have sold perhaps ten thousand tokens and there are more to come. A typical lot consisted of many, many tokens. As I'm interested only in the Hoyle items, I bid on one lot only that was all Hoyle and I picked up another token when a Holabird purchaser split up a lot and sold the Hoyle token on eBay.

Aside: I can tell all kinds of stories about mixed lots at auction, typically a cheap book I really want with more expensive ones I don't. Annoying!!!

Anyway, I was excited to complete a set of early whist tokens. In the essay "Hoyle's Scoring Method and Whist Counters" I showed tokens one, two and three; now I have a duplicate or two, plus number four. The writing on the envelopes is Fauver's and the references to Mitchiner are from Jetons, Medalets and Tokens, volume three, British Isles circa 1558 to 1830, London: Hawkins 1998.

And the lovely Fauver token from eBay: