Two Beauties of Hoyle, both owned by women. Coincidence?

I am nearly done putting bookplates in my gaming books, with just a box or two of small pamphlets to go. You can see the bookplate in my 2019 collecting essay. The project has been largely tedious, but it has been fun to revisit each item in the collection. I have learned a lot from classes in provenance and binding at Rare Book School and from bookish Facebook groups on endpapers, bookplates, and bookseller labels.  I've become attuned to aspects of my books I had missed initially.

So here's something I just noticed, and it has me wondering...

In my essay "Eighteenth Century Whist Literature," one of the books I discussed was The Beauties of Hoyle and Paine by General Scott (London: 1792). The Oxford English Dictionary says that "beauties," a term now used rarely, is found in titles of anthologies to mean "the choice passages from a particular writer, genre, etc." So The Beauties of Hoyle and Paine includes choice passages from Hoyle's Whist and Payne's Maxims for Whist (discussed here). General Scott misspelled Payne as Paine.

I have two copies of the first edition of Scott and no others are recorded in WorldCat or ESTC. I have vague memories of seeing a copy in the trade about ten years ago, so perhaps a third has survived.

What is remarkable is that both my copies show evidence of ownership by women. The copy above has a seemingly contemporary ownership inscription "Mrs. Buckland" on the title page.

The other copy is presented by R. Coningham to Mrs. Hewit. 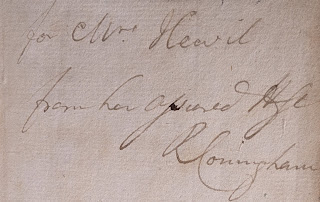 Can you help me make out the third word in the next line? I read "from her affined Hoyle" with "affined" meaning "bound in relationship." If I'm reading that correctly, it's rather charming! A reader sent a more plausible reading: "my assured Hoyle".

What is striking is that both copies of Beauties manifest ownership by women. Coincidence? Or are these Beauties intended for female readers?

There were hundreds of Beauties: of Shakespeare, of popular magazines, of biography ("for the instruction of youth of both sexes"), of history ("designed for the instruction and entertainment of youth"), of the poets, of English drama. The beauties of Johnson and Fielding and Goldsmith and Hervey and so many more. I extracted phrases from the long title suggesting an appeal to the young, but there is also The Lady’s Poetical Magazine; or, Beauties of British poetry.

I've never seen books on whist offered to youth, so I wonder...might this Beauty have been created for women?